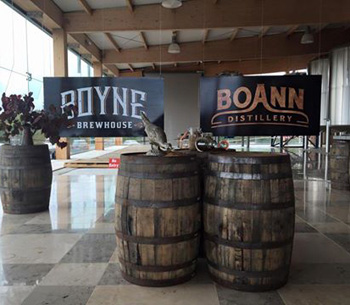 The Drogheda based facility will include a whiskey distillery, craft brewery and taproom, a visitor centre which will host distillery and brewery tours, a 120 seater restaurant, whiskey bar and a gift shop.

Pat Cooney, CEO of the Boann Distillery and Visitor Centre, said: “I’ve been in the drinks industry for the past 40 years and it has been a nagging ambition to establish a Distillery of my own. To be able to realise this ambition, with the encouragement and participation of my wife and family, is a great bonus and to be able to establish this project in this super building in my home town is a multiple bonus. The location in the Boyne Valley is a very valuable asset and we hope to play our part in promoting the tourist potential for this major attraction and Irelands East Coast.” 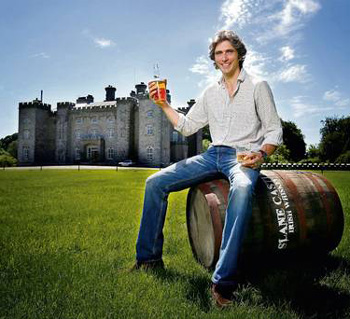 Slane Castle Irish Whiskey was originally launched by the Conyngham family in 2009. It was was distilled on behalf of the family by Cooley Distillery. A new distillery was completed at Slane Castle on 2017 by US Distillers Brown Forman, the company behind Jack Daniel’s. The distillery is located in the old stable yards on the Slane Castle estate.

The Conyngham family will remain at the core of the business into the foreseeable future.

Distilling in Ireland began in the 6th century when religious monks brought with them the technique they used to create perfumes and Eau de Vie - Water of Life. Rather than using grapes and other fruits, the Irish used the local cereal crops as ingredients. Uisce Beatha, the Irish for Water of Life, was born. Throughout the years, as Ireland became more anglicised, the pronunciation of Uisce Beatha ultimately evolved into whiskey.

The Red Book of Ossary dating from the early 16th century records Uisce Beatha being produced for consumption, but the art was still the preserve of the religious orders. It is only following the dissolution of the monasteries in the Tudor period that whiskey ceased to be the drink of the elite. Queen Elizabeth I was known to be fond of the beverage, and she was not alone. It is said that Peter the Great, Czar of Russia, mentioned that “of all the wines, the Irish spirit is the best”.

The early 19th century was a golden era for Irish whiskey with dramatic growth from 40 distillers in 1823 to 86 in 1840. Between 1823 and 1900, the output of Ireland’s distilleries quadrupled. Dublin whiskey, with its six powerhouse distilleries, dominated the Irish and world stage. Distilleries such as Jameson, George Roe and Powers employed hundreds of workers with their own cooperages, stables, blacksmiths and carpenter shops and they exported around the globe. Indeed it was about this time that the Dublin distilleries, intent on forging their uniqueness amongst other whiskies from Scotland and provincial Ireland, introduced the idea of spelling their whiskey with an e.

By 1900 Ireland was the world leader for whiskey, selling 12 million 9-litre cases per annum. A major turning point in the history of Irish whiskey came in 1830 when Aeneas Coffey, a former Inspector General of Excise in Ireland, developed and patented a more efficient method of distilling. “Coffey’s Patent Continuous Distilling Apparatus” (effectively a column still) revolutionised the whiskey industry. Most of the Irish whiskey distilleries did not embrace the new distilling technique until towards the close of the nineteenth century. A significant consequence of the new production method was that many smaller traditional pot still distillers struggled to survive against the cheaper continuous production afforded by the new Coffey still.

Just as Irish whiskey was riding a wave, the beginning of its decline was just around the corner. Over the preceding years, the Scottish distillers had been radically increasing output of whiskey from Coffey stills giving rise to an enormous surplus of whiskey and the collapse of whiskey prices. Combined with recession and the onslaught of the World War I, the Irish whiskey industry found itself in the eye of a storm. In 1916, the Easter Rising happened along with the economic turmoil which accompanied it.

In 1917, all distilling in Ireland ceased as all barley was required for the war effort. Up to this time, the largest whiskey market in the world was the USA, which also happened to be the largest export market for pot still Irish whiskey. In 1919, the Volstead Act was passed and Prohibition was enacted and overnight the single most important market for pot still Irish whiskey was shut down. The Irish War of Independence in 1921 was followed by the Irish Civil War from 1922 to 1923. As the 1930s came to a close, the Irish whiskey industry had been decimated.

Further damage was caused when bootleggers cashed in on the Irish whiskey reputation during the prohibition era in the USA. Much of this whiskey was of such an extraordinarily poor standard that it caused every right minded drinker to treat with extreme caution anything which purported to be Irish whiskey. By the time prohibition had ended in 1933, the Irish whiskey industry was reeling and unable to cash in on the pent-up demand that the US market now represented. The Irish distillers had reduced their stocks of maturing pot-still whiskey, the reputation of which had been irrevocably damaged by the bootleggers, while the Scots were ready to expand with their stocks of ready available blended whiskey.

To compound matters, in 1932 the recently emancipated Irish government entered into a trade war with its former landlord and largest trading partner, Great Britain, culminating in exclusion to 25% of world markets. This meant that the remaining exports for Irish whiskey disappeared behind a wall of duties and levies.

By 1953, there were only six distilleries on the island, mainly based on domestic demand. By 1966, the number of distilleries operating in Ireland had dropped to four. This became two as Jameson, Powers and Cork Distilleries merged to form Irish Distillers.

The late 1980s marked the beginning of Irish whiskey’s comeback. In 1988, Irish Distillers (IDL) became a member of Group Pernod Ricard, which provided massive distribution opportunities for Jameson, and the other IDL Irish whiskey brands, through its well established global sales network. In 1987, Cooley Distillery was established and was the first independent distillery to begin distilling Irish whiskey in over 100 years.