Trim Castle is the largest Anglo-Norman castle in Ireland, it was built by Hugh de Lacy when he was granted the Liberty of Meath by King Henry II in 1172. Construction of the massive three storied Keep, the central stronghold of the castle, was begun in 1176 on the site of an earlier wooden fortress. This massive twenty-sided tower, which is cruciform in shape, was protected by a ditch, curtain wall and moat. Trim Castle was the location for King John's Castle in the film 'Braveheart' the 1995 historical drama directed by and starring Mel Gibson.

Trim Castle is one of the finest examples of Norman architecture still standing in Ireland today. Their legacy has long outlived their days of power and reminders of this fascinating legacy continue to dominate the Irish landscape. The Normans had interesting ideas about government and administration, and they were certainly good organisers. But nowadays it is easier to consider them not as soldiers but as innovative architects, as builders of genius. Norman castle design, inspired by the demands of defence, ironically resulted in structures of great beauty. There is nothing particularly appealing about a modern derelict building, but Ireland's ruined stone castles and tower houses are objects of beauty as well as signposts to Ireland's history.

The greatest of these Norman creations is King John's Castle at Trim, Co Meath, the largest Anglo-Norman castle in Ireland. Viewed against the night sky it conjures up the usual images of romance associated with castles. By day, however, it looks every inch the formidable military bastion it was intended to be.

Its massive three-storey stone keep, or main building, is the definitive stronghold. It possesses a bewildering 20 sides and three of its original four towers still flank it. Approached from the road, past the Barbican Gate, the castle stands tall behind the curtain wall built to protect it from potential invaders. So effective was this, and the castle's other defences, that it took a one-time owner, Walter de Lacy (son of Hugh), returning from a visit to England in 1223, some seven weeks to regain his property.

Long before the arrival of Hugh de Lacy, Trim, the Town of the Ford of the Elder Tree, had an earlier monastic history. If most castles are built with strategic notions in mind, few in Ireland are quite as brilliantly located as Trim. It overlooks a crossing on the Boyne and even now, some 800 years after it was built, the castle still dominates the town that has respectfully developed around it.

At a time when so many ill-advised planning decisions are now lamented, having left numerous ancient monuments and surviving monastic and settlement sites surrounded by incongruous modern industrial and residential estates, Trim Castle has somehow retained a vivid sense of the landscape that would have originally surrounded it. The town has kept its distance; the view from the castle across the river to the north banks of the Boyne is of extensive open commonage.

All of which adds to the drama of the Trim fortress. Imagination as well as common sense are useful when it comes to exploring this vast stone castle, which had declined long before Oliver Cromwell arrived in the area. Already semi-ruined by then, the castle was besieged by Royalist forces and was used for a while as a Cromwellian base.

Some years later Richard Pococke (1704-65), Archdeacon of Dublin, later Bishop of Meath and a remarkable traveller who had explored Egypt and the Alps before tackling Ireland, conscious of Trim's history, wrote in 1753 as he toured Co Meath: "But the greatest piece of Antiquity is a very large Castle called King John's Castle, which is a building of great Strength, the enclosure extending to the river."

By the 18th century Trim Castle had been finally, and definitively, abandoned. Its relatively short career as a habitation has left us with the advantage of being able to look at an Anglo-Norman castle that, although constructed in three main phases over a 50-year period, was never subject to later renovations, rebuilding or remodelling. There is no clash of contrasting architectural styles, there are no Victorian bits and pieces - it was conceived as a Norman castle, and so it remains. Its neglect does not appear important, such is the extent of its preservation.

If we consider castles in general, however glorious such structures appear, and Trim is particularly impressive, they were not easy places to live in. Cold, draughty, denied of light as large windows could be exploited by intending invaders, life in a castle was difficult. Added to this were the smells and the obvious lack of privacy. Still, as we were neither under siege nor contemplating invasion the other day as we assembled with a group to tour the keep, adventure and curiosity guided us.

Adventure, curiosity and Nichola McDonagh of the OPW, who held what looked like a giant's key to the keep's only entrance, a huge wooden door. She is the site's chief custodian. Surveying the adults and children before her in the strong, cold wind of a typical March Sunday afternoon, she glanced up at the castle and across the three-acre site before asking rhetorically: "Who were the Anglo-Normans?" She then proceeded to outline their origins. "They were descendents of the Norsemen who had settled in Normandy, in France." Obviously they were not typical tourists, their plans being expansionist in character. Having set their sights on England, the Battle of Hastings in 1066 marked the beginning of the reality.

Standing in the shadow of a ruined castle in Co Meath might seem aeons removed from Norman ambitions. Yet it was to prove central. In an attempt to contain the developing relationship between a Norman baron, Richard de Clare, Earl of Pembroke, better known to history as Strongbow, who had established an alliance with the native Irish by marrying the daughter of Diarmaid Mac Murrough, Henry II sent Hugh de Lacy to Ireland. Henry had earlier relieved Strongbow of his earldom and there was immense ill-will between them. De Lacy was already a wealthy man, but the king, in order to sustain his interest and loyalty, granted de Lacy in 1172 the ancient Irish kingdom of Midhe, which included not only all of the modern county of Meath but a vast territory extending west to the Shannon.

To any discerning empire-builder, and de Lacy is certainly the architect of Norman Meath, the site where Trim Castle now stands must have appeared ideal for the construction of any stronghold. De Lacy's initial building project was not a stone castle, it was a timber fort, encircled by that first line of defence, an earthen trench or ditch which was further consolidated by a stockade. Work on what would become the great stone castle we see today began about 1176.

For a few moments history seems to overshadow the castle itself, but McDonagh knows how to tell her story - and tells it well. The world of Shakespeare's history plays comes to life as, after all, this is the world that instigated the construction of Trim Castle. She describes the castle as a residence but, more importantly, as a place of administration, the equivalent of "a modern office block". Pointing out the three surviving towers, she tells us we are standing in the space formerly occupied by the collapsed fourth, which appears to have simply fallen away from the core block of the keep, leaving a seam-like scar. It also provides a useful cross- section of the castle plan. A platform-like modern stairway leads to the keep's door, which is high above ground level for obvious reasons of defence.

On entering the castle, visitors stand in what was known as the "disarming area" - this was where you handed over any swords or weapons you were carrying. Fresh water is crucial to all life, particularly as lived in a medieval castle.

"There was no well or spring here, and this is a major flaw at Trim," McDonagh says, and adds that the surest way to pollute the water supply of any castle under siege was to "throw in a dead animal and let nature take its course". But the Normans were clever, McDonagh explains, outlining the methods they used to collect rain water for storage in vast water tanks.

Inside a large room that once served as the original great hall - there were two subsequent great halls, one on the top floor or third storey, and then later outside by the curtain wall - are three models that explain the three main building phases. The first was undertaken by Hugh. But his life was cut short by an assassin at the monastic site of Durrow, Co Offaly. There, at the place where Colmcille or Columba had established a church, de Lacy's head was severed from his shoulders by a native Irishman who naturally was not charged with the crime.

With Hugh dead, his son Walter, after a wait of three years while he came of age, took over and the castle was further enlarged and improved. Plinths were added to the base to make the job of invading sappers or miners that bit more difficult. Some 30 years after the original castle construction began came phase three and the addition of the third storey.

Back in the east tower we visit the chapel, accessed by a spiral stairway. A carved stone trough or piscine used for washing the altar vessels still remains. Traces of what would have been a three-light glazed window may be seen. In the Middle Ages, glass was a definite status symbol. The only problem was that it was difficult to see through. That the various castles' roofs were once tiled is evident from the four and a half tonnes of broken tiles excavated at the site - as were 17 human heads.

Every modern-day castle visitor is shown the garderobe or privy, over which, as McDonagh explains, clothes were hung. Nothing was ever washed, but the fumes from the human waste killed lice and fleas.

There are three rooms on each floor in each of the towers and in the keep. Once out on the roof, you become aware of how high the castle stands.

The view includes the Wellington monument, the steeple of St Peter's and glimpses of the modern town of Trim. The hero of Waterloo is believed to have been born in Trim and educated locally, at least for a time, at St Mary's Abbey, on the north bank across the river from the castle. Views of the Dublin and Wicklow mountains are seen with varying levels of clarity depending on conditions.

Far closer, only about a mile away, is the extensive ecclesiastical site of Newtown. The Boyne rushes by. But 800 years on, Trim Castle stands firm. 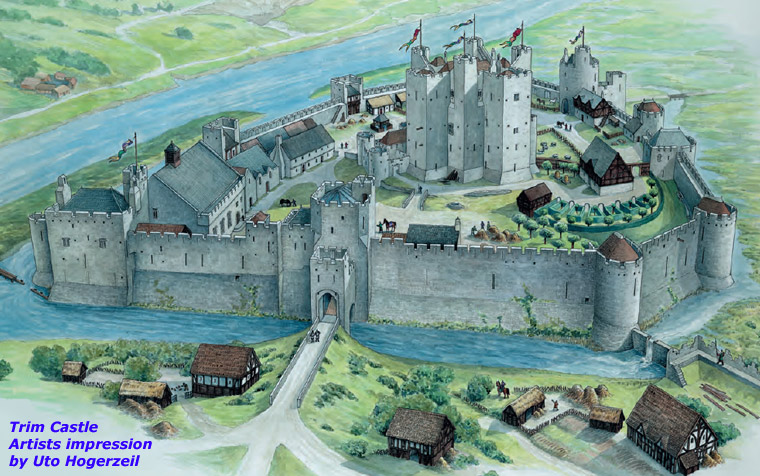 
"Michael Fox made our day in the Boyne Valley extra special, I felt like we knew Michael as an old friend"  More ...

"Michael was great company and couldn't do enough to ensure we enjoyed our day"   More ...

"When I say this is the best tour I've been on, I mean it and I've been on safaris, Harley excursions, and been on trips around the world. If you go to Ireland you have to try and get Michael to show you around if he is available! You will definitely have the best tourist guide in Ireland" - Tom, Texas, USA.  More ...

"Michael was superb in exceeding our aspirations, our detailed questions and great company to spend the day with. I was delighted with the high quality of Michael's tour, real attention to detail, and a personal service delivered with genuine insight and humour. " - Marion and Mike.  More ...