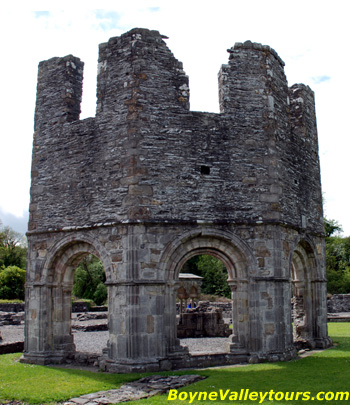 Mellifont Abbey was the first Cistercian monastery in Ireland, founded in 1142 by Saint Malachy, Archbishop of Armagh. The abbey was built on the banks of the river Mattock about 10km (6 miles) north of Drogheda and about two miles from Monasterboice.

Various Celtic kings gave donations to assist the foundation of Mellifont Abbey: Donnachadh Ua Cearbhaill (O’Carroll) , king of Airghialla (Oriel), gave the land and the materials for the building of the abbey, Muirchertach Ua Lochlainn, king of Ulster gave cattle and gold, and Derbforgaill, the wife of Tigernan Ua Ruairc gave gold, a chalice and the altar cloths.

Mellifont Abbey was shut down by King Henry VIII of England following his decision in 1539 to suppress all the monasteries in his realm and to divide their possessions among his political supporters.

In 1603 the Treaty of Mellifont was signed at Mellifont Abbey between the English Crown and Hugh O'Neill, Earl of Tyrone. Mellifont Abbey was now a fortified house and the property of Garret Moore a close friend of Hugh O’Neill.

William of Orange used Mellifont Abbey House as his headquarters during the Battle of the Boyne in 1690.

Little of the original Mellifont Abbey remains today, the most striking feature is the 13th century lavabo where the monks washed their hands before eating.

The Founding of Mellifont Abbey

In 1140 Maelmhadhog O’Morgair, better known as St. Malachy, bishop of Down and at one time Archbishop of Armagh was travelling to Rome. Attracted by the fame of St. Bernard he visited Clairvaux and was so impressed that on arriving at Rome he petitioned the Pope’s permission to resign his bishopric and enter Clairvaux as a novice. This permission was refused but on his return journey he left some of his companions at Clairvaux to be trained in Cistercian life with a view to founding a monastery of the Order in Ireland.

St. Malachy chose a site for his proposed monastery 10km (6 miles) north of Drogheda in Co. Louth. This land was in the territory of Donnachadh Ua Cearbhaill (O’Carroll), king of Airghialla (Oriel), who donated not only the land but also the materials for the building of the new abbey. The first group of monks, the Irish monks trained by St. Bernard at Clairvaux, accompanied by some French monks who were to direct the building of the new abbey, arrived in 1142. Initial difficulties arising from the French design of the abbey, which interrupted the work, were settled by St. Bernard and St. Malachy and the construction was resumed and continued until completion in 1157. Before that date, however, St. Malachy again called at Clairvaux on another journey to Rome in 1148. While there he was struck down by fever and died in the arms of St. Bernard on 2nd November.

Within thirty years of the founding of Mellifont Abbey a Norman army landed in Wexford on the east coast of Ireland in 1169. The Normans were supportive of the Cistercian Abbeys and as they advanced through Ireland they confirmed the existing abbeys in their titles to their properties. As time passed, they sought to use the monasteries as centres of Norman influence by having Norman monks appointed to all positions of authority even expelling Irish monks and replacing them by men brought in from foreign monasteries. By the beginning of the 15th century, Mellifont Abbey had become the proprietor of estates totalling 48,000 acres. The abbot had become a great feudal lord exercising civil, as well as ecclesiastical jurisdiction in his domains and having a seat in the English House of Lords.

The Suppression of the Abbey

After the suppression of Mellifont Abbey in 1539 by King Henry VIII, the abbey and its lands came into the hands, successively, of the Townley, Brabazon, and Moore families. Sir Garrett Moore, who lived at the abbey in 1603, was a close friend of Hugh O’Neill, and it was to Mellifont that Hugh O’Neill came to make his submission to the Lord Deputy Mountjoy at the end of the Nine Years War. He returned to Mellifont to bid farewell to his friend before setting out on his last voyage, which was to become known in history as the “Flight of the Earls”. Garrett Moore, Viscount of Drogheda, died in 1628. His son Charles succeeded him but was killed in an engagement with Owen Roe O’Neill in 1643. Henry Moore, his successor, entertained the officers of King William at Mellifont on the night before the Battle of the Boyne.

On approaching the ruins of Mellifont Abbey today, the first building that the visitor encounters is a massive, castle-like structure. This is all that remains of the original gate house of the old abbey. The entrance road formerly led through the archway beneath the tower. This great defensive structure, three storeys high above the vaulted basement was a necessity in the centuries when Mellifont stood on the border between the “Pale” (that part of Ireland under Anglo-Norman rule) and the territory under the control of the native Irish chieftains. The tower was strategically sited on a projection of naked rock within a few yards of the river. The area around this guesthouse was occupied by a variety of buildings: the abbot’s residence, a guesthouse and a hospice for the poor. 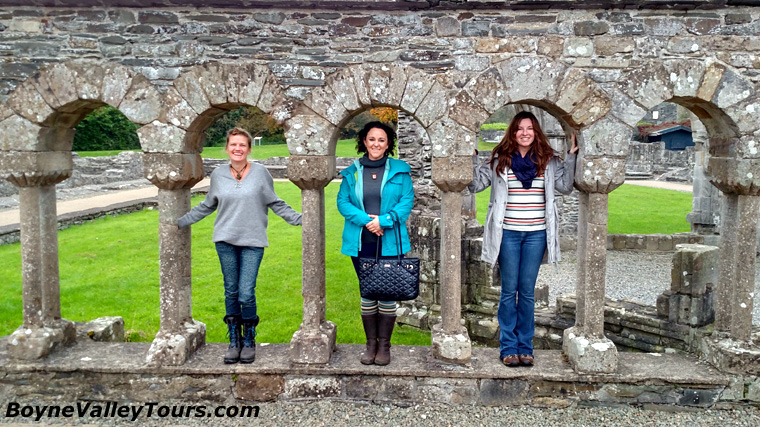 Arriving at the present entrance gate to the abbey ruins the visitor can look down on the outline of the entire abbey buildings below. As Mellifont Abbey was originally built by monks sent from Clairvaux by Saint Bernard, its plan follows closely that of its mother house. Along the northern side, nearest to the entrance gate, the great abbey church, 190 ft long x 54 ft wide, including the side aisles, ran from east to west. Beyond the church stretched a rectangular open space – the cloister garth, which was surrounded on its four sides by the cloister, a covered passage linking all the main buildings of the abbey.

On the east side of the cloister stands the chapter house, where meetings of the community were held. Its vaulted ceiling is still intact but its once elaborately decorated entrance arch has been removed. Rooms, such as the bursar’s office and store rooms, occupied the remainder of this side of the cloister and the upper storey of this wing was the choir monks dormitory. Opening unto the south cloister were the refectory (community dining hall), kitchen, warming room, etc.

Four of the arches of the octagonal “Lavabo”, which once housed a central fountain for hand washing before meals, still stand in the cloister garth opposite the entrance to the refectory. On the west side of the cloister are the foundations of the lay brothers quarters. Excavations have revealed a constant tendency to expansion and renovation over the four centuries during which the Cistercians occupied Mellifont Abbey. The presbytery and transepts of the Church were completely remodelled in the fourteenth and fifteenth centuries and a new chapter house, the one which we can see today, was built at the same period. 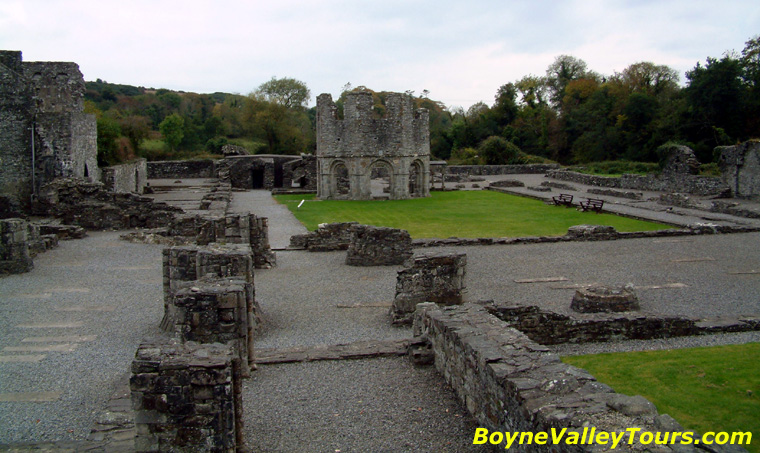