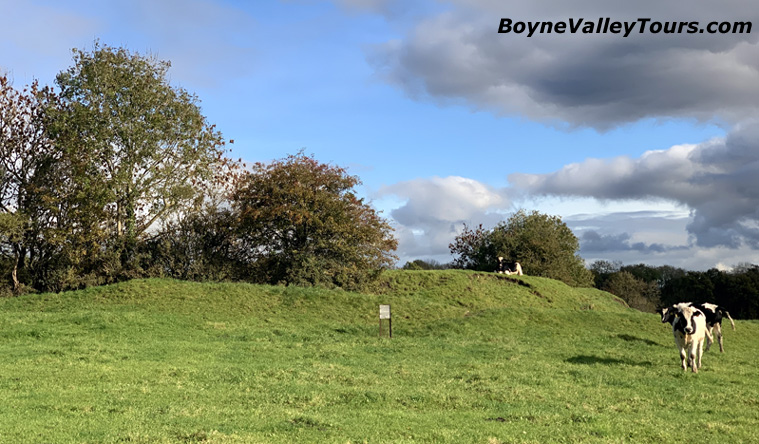 Danesfort Ringwork Castle consists of a raised platform enclosed by two banks with an intervening fosse. 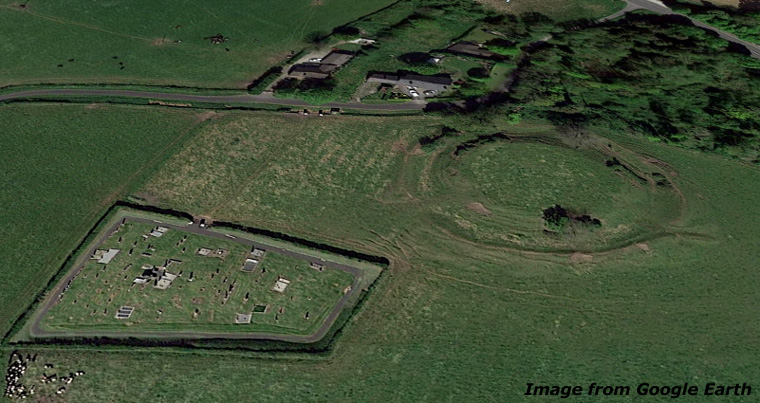 Satellite view of Danestown Ringwork Castle showing the adjacent cemetery and ruins of a Medieval Church. 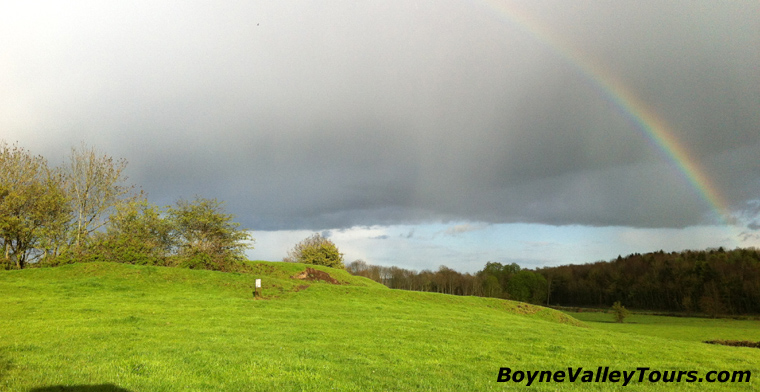 Rainbow at Danestown is a good example of an Anglo-Norman ringwork castle.

Danesfort Ringwork Castle consists of a raised platform enclosed by two banks with an intervening fosse. The interior is a raised platform, which is oval in shape and measures 40m east-west and 34m north-south. As the site has been modelled out of the end of a natural ridge, the platform is raised higher above external ground level on its southern and eastern and northern sides than it is at the west and north-west. The interior appears to be highest on its southern side, where it is approximately 4.5 or 5m above external ground level.

The interior of the site is fairly level and no internal features are visible. The interior was originally defined by a small inner bank around its perimeter, although this bank now survives only from the north-west anti-clockwise to the south-south-west. It is best preserved at the west where it is 70cm in height above the interior. It is possible that the inner bank was more substantial at the western end of the site in order to compensate for the fact that the site is less high above external ground level at this point than it is elsewhere, as it is here that the site is cut off from the rest of the ridge.

From the summit of the inner bank (or from the platform where the inner bank has not survived) there is a steep drop down into a wide fosse. From the top of the external bank to the slope opposite, the fosse measures between 7m and 12.8m wide. The fosse is U-shaped and flat-bottomed, measuring between 3m and 4.8m in width across the base.

The entrance to the ringwork castle is located at the south-west and is orientated directed towards the ruins of the medieval church. The entrance consists of a gap in the inner bank, a corresponding gap in the outer bank and a well-defined ramped causeway across the fosse. The gap in the inner bank measured 4.5m in width at the base, while the gap in the outer bank measures 7.8m. The causeway measures approximately 3m in width across the top and 6m at its base and has a maximum of 0.4m in height above the base of the fosse.

There is also a gap in the outer bank at the east. As there is no evidence for a gap in the inner bank or a causeway over the fosse, it seems likely that this is the result of relatively modem disturbance rather than an original feature.

The place-name Danestown seems to be derived from ‘de Aveni’s town’. The documentary evidence indicates that the de Aveni family held this manor as vassals of the de Feipo lords of Skreen from the late twelfth century.

The earthwork site at Danestown is a good example of an Anglo-Norman ringwork castle. The site’s morphology, consisting of raised interior enclosed by a small inner bank, wide fosse and substantial outer bank, is consistent with this interpretation. The siting of ringwork, on one end of a ridge also seems typical of a ringwork castle. The documentary evidence suggests that the ringwork castle was associated with the manor of Danestown, which was held by the de Aveni family of the de Feipo lords of Skreen. The ringwork's proximity to a medieval church site also indicates that there was a manorial settlement in this location.