The Boyne Canal system is a series of canals running 31km (19 miles) parallel to the River Boyne from Oldbridge (Battle of the Boyne site) to the town of Navan. The canal system was used by horse drawn boats travelling between Navan, Slane and the port of Drogheda.

The designers intended that the canal system continue upstream along the Boyne past Trim where it could connect with the Royal Canal. The section from Navan to the Royal Canal was never built and the Boyne Canal system remains disconnected from other inland waterways in Ireland.

The Boyne Navigation Company began work on the lower section of canals from the sea lock at Oldbridge to Slane in 1748 and was completed in the 1760s. The upper section from Slane to Navan was completed in 1800. The main cargo carried was grain and flour between the mills on the river and the port of Drogheda and coal in the other direction. 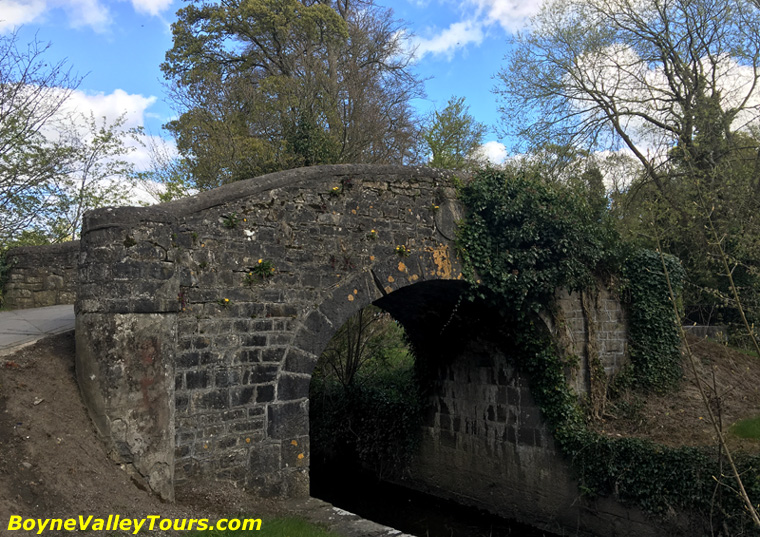 Ruxton Lock Bridge on the Boyne Canal at Navan

At four places along the route the towpath switches from one side of the River Boyne to the other. Where this happened the horse would step onto the barge while it was poled across to the other side. David Jebb was the engineer in charge of the construction. Jebb himself built a flour mill at Slane in 1766 to take advantage of the navigation that he had recently completed that far. When the mill was opened it was the largest of its kind in Ireland.

The canal system was never a commercial success, it was only usable for eight months of the year as there was too much water in the river during the winter months and too little in the summer. The canal system did expand the local economy by making it easier to transport agricultural goods from the Boyne Valley to market. John Spicer whose family business owned 3 mills in Navan purchased the canal system in 1915 after the Boyne Navigation Company went into liquidation. It was successful for a time ferrying grain to Drogheda and returning with coal and timber. The railway and later road transport lead to the eventual demise of the navigation route.

An Taisce (The National Trust for Ireland) purchased the navigation rights to the canal from John Spicer & Co. for one Irish pound in 1969. An Taisce also own most of towpaths and adjoining lands. A number of sections of the towpath are maintained as walking paths, particularly the section from Stackallan Bridge to Navan.

The Boyne Navigation branch of the Inland Waterways Association of Ireland are actively retoring the Boyne Canal system. The Sea lock at Oldbridge has been restored and they are now working on the Staleen lock near Newgrange. 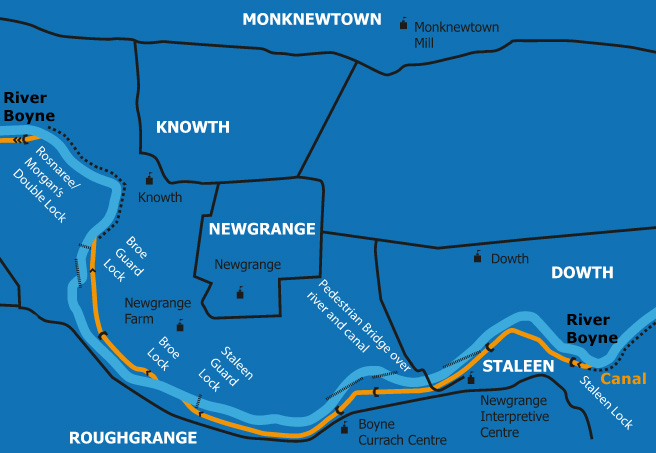 Boyne Canal at Newgrange - An Taisce