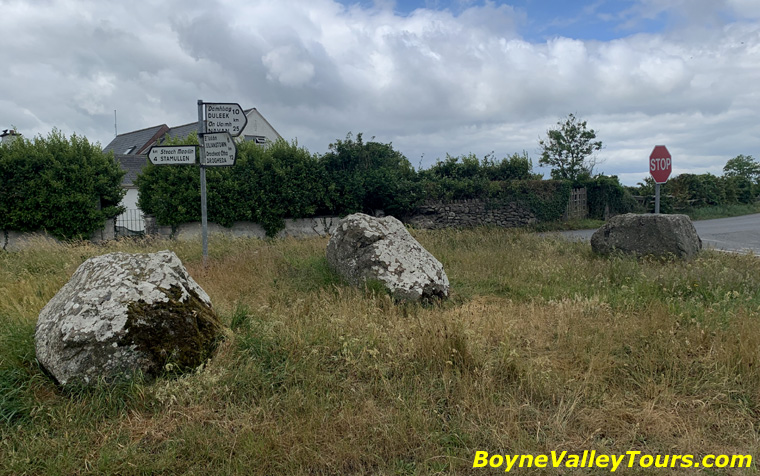 The Jack Stones at Greenanstown are three large limestone boulders, possibly the remains of a Bronze Age Stone Circle. They are located just 3km from the Fourknocks Megalithic Passage Tomb.

Brendan Matthews a local community historian tells the story of the Irish mythological character Fionn MacCumhaill who lived at the Jackstones. One day great warrior from Scotland arrived at Fionn's house at Greenanstown to do battle with the Irish Warrior. Fionn had heard in advance that the Scotsman was on his way, so he dressed up as an old woman and awaited the arrival of his great foe.

When the warrior arrived, Fionn opened the door and the Scotsman asked "Is Fionn here, for I'm here from Scotland to do battle with him" Fionn answered "No, he's away hunting, I'm his mother and I don't know when he may return". "I will wait so" said the Scotsman and he walked into Fionn's house. Fionn, remaining in the guise of an old woman purporting to be his mother, then asked him if he might like some of Fionn's favourite bread which had only just been baked. "Great" said the Scotsman, "I'll have some of that". Fionn then handed him some griddle bread in which he had placed several fragments of stones and when the Scots warrior ate into the bread, he broke his teeth and cut his tongue before spitting it out. "Takes some warrior to eat that kind of stuff" he exclaimed!

He then stood up and, looking out the windows at the front and rear, he saw the Jackstones and the Marrying stone. "What are they" he asked? "Oh, Fionn trains with those aul small stones out there" He throws them over the house and before they land on the other side, he runs around the house and catches them before they hit the ground, it's a great pity you didn't arrive earlier today before he went away hunting for you would have seen him do it, but he was called away in a hurry and he didn't bother throwing that other aul stone over from the back of the house, I expect it will be the first thing he will do when he gets back shortly" On hearing this news, the Scots warrior took off and was never seen near Greenanstown again. 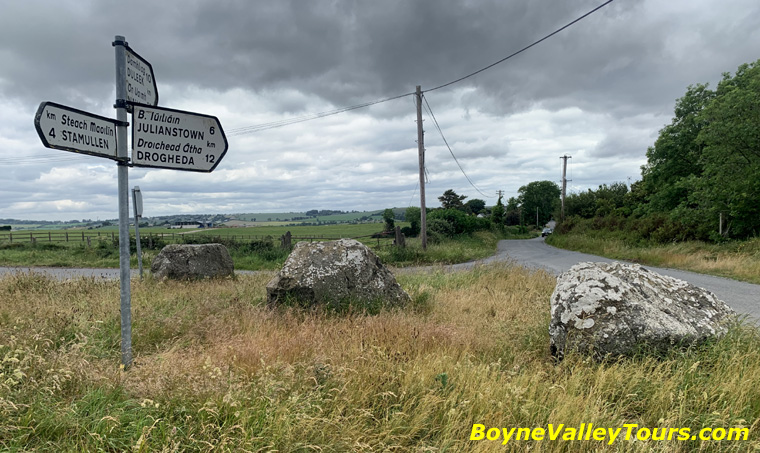 On the village green in Greenanstown there are three large stones called the Jack Stones. Another stone may be seen in the field at the back of the school and another of similar size in a fence alongside the public road. Each stone weighs about six tons. The three on the green are in a straight line. It is generally supposed that they were sacrificial stones - Druid's Altars, or making a place of assembly. A man discovered what appeared to be a grave surrounded by stones, standing on their edge. He opened the mound and found it full of red clay (burnt clay). Formerly the three large stones were surrounded by a circle of smaller stones, about one ton in weight. When the road was constructed the smaller stones were removed. One of those stones - called the marrying stone - is in the possession of Anthony Carton, Greenanstown. A family named Gennet lived in this village about 80 years ago. There were two brothers, Paddy and Bill. The latter "left a task" on the village for any man who came after him. He jumped from stone to stone - a feat which has not since been attempted. The Schools’ Collection - folklore compiled by schoolchildren in the 1930s.

This tour was probably the best private tour that we have taken. We decided to begin the tour upon our arrival. Instead of making other arrangements, Michael volunteered to pick us up at the airport and begin our tour. We took the Megalithic Tour because we were very interested in Newgrange. Michael is extremely knowledgeable of the time period and many aspects of Newgrange. We also toured the Hill of Tara, saw St. Patrick's Well and he was able to get us into Fourknocks. The tour was well worth the money and you are truly getting a person with indepth understanding of the area and its truths and Mythology.